Looking back from the present we see the Impressionist movement from about 1874 as the dominant movement, and certainly the popular understanding is that the major painters were Van Gogh, Monet, Renoir, and so on. But at the time there was a movement we could call “Realism”, and the work Ramsay created is much more in this style. Most painters who were in Paris at the turn of the century would not have had an appreciation of what the impressionists were attempting, although there was some cross-pollination; Singer knew Manet and was influenced by him. Rather than saturate their paintings with light and colour, and rather than choose outdoor scenes, the Realists tended to use a darker, more limited palette and their subject matter was often the human form, indoors.Ramsay displayed artistic talent at a young age, and developed his original style early in his short career. It is relevant to note that his life ended at an age when most artists are still forming their particular approach to painting.

There are influences which can be gleaned from his letters and seen in his paintings. There were three main influences on his development; Velasquez, Whistler and Sargent. Examples of their paintings are shown here.

When four of his paintings were hung in the prestigious New Salon in 1902, he wrote: “it seems ridiculous to see a list of names in which the first one is Ramsay and Whistler and Sargent following.”

Velasquez, 1599-1660, was the court painter in Spain, and he was seen as the master of tonal values. This use of tone to define not only form but also space fascinated Ramsay and continued to be an inspiration throughout his life. The dark and muted tones, the concentration on the human figure in a sparse scene we see in Ramsay’s self-portraits hark back directly to Velasquez, and the composition of some of his paintings echoes the structure of the works of the earlier painter. Ramsay’s painting “Portrait of artist standing before easel” has the artist facing an easel in a similar manner to Velasquez in his painting “Las Meninas.” 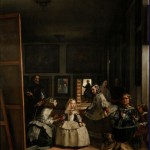 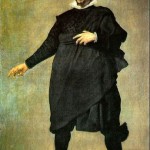 James McNeill Whistler, 1834-1903, was an American painter who, although painting when Impressionism was a major movement, was less concerned with capturing light and colour, and more with the subtle effects of tone. Ramsay would have seen some of Whistler’s works in Glasgow (the portrait of Thomas Carlyle for example) and in London and Paris.” 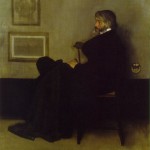 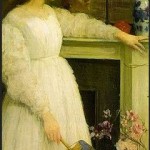 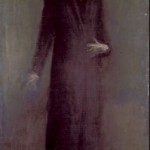 John Singer Sargent, 1856-1925, was a friend of Whistler, and his work can be seen in the “tonal” tradition. Ramsay was influenced by the bravura style, the technical mastery of rich textures and dramatic lighting, the striking poses, and, it needs to be said, the social success and wealth that Sargent had achieved.

Ramsay wrote of this painting:”Sargent’s best thing of the year, I think, is here…a most extraordinary tour de force. The quick arrested action of a little girl is wonderful. It’s just wonderful, a real painter’s picture.” 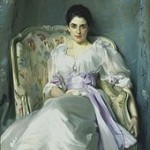 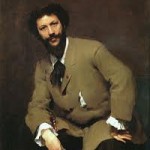 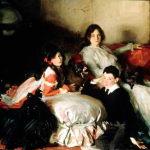 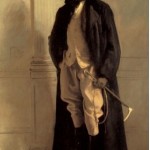