This letter was written to his 2 brothers in Melbourne. Scotch College is a private school in Melbourne. Ramsay’s partner walking along a boulevard in Paris, eating bananas, was George Lambert. George Lambert and his wife Amy met Ramsay on the ship from Australia to London and remained firm friends and artistic colleagues. Frederick Frieseke was an American painter and friend at the same address in Paris. See the photographs for the photo of Frieseke singing and Ramsay playing a piano. Carolus Duran 1837-1917 was the teacher of John Singer Sargent and a portrait of him is included in this website. When Ramsay saw Duran’s work he assessed that the French painter’s work didn’t match his earlier work;” but although parts now resemble the old Carolus, he shows a great decay of power.” Jean Paul Laurens 1838-1921 was one of the last French painters in the old academic style.

Auntie has been telling me that you’ve both been laid up & deathly sick on account of not receiving a letter from me, so I think it’s about up to me to hold forth. How are you, kids? What about the ‘Scotch’ Reg, Harry. Did they pass you? And Tom, he never writes to me, so I’ll caricature him till he does. Glad to see programme of Club concert. Nellie sent it to me. You had a jolly good programme, Hal. Why didn’t you give ’em a song & dance, Hal?

So you reckon you’re quite a hayseed now eh? Beard & all eh! Oh you say you haven’t grown ‘em yet. Never mind, don’t despair. So you’ve

been building another of your fine buildings eh, like the boat, a pigsty is it now? Of course, now you’ll be good enough to keep father’s tools in good order, so when he wants to mend the barrow or paint the buggy or water the orange trees, he won’t find his tools like this. I suppose you’ve got a great garden now, oranges & turnips and all sorts of fruit. In Paris the other day Lambert & I went on the bust & bought 2 bananas for 4d, & chewed ‘em walking as proud as Lucifer amongst the toffs in Rue de Rivoli. So you’ve had to do the pump act every morning, have you? S’pose you’ve had a drop of rain since? So you & Will Ley had a good time at the Harvest Festival, did you? Eating oats I don’t really look on as a luxury.

It sticks in your neck too much. How did you eat it, anyhow? Like this. Felt frisky & kicky, eh? ‘Frisky’, that’s what we call a little son of a gun, an American called Frieseke, next door to us. He’s lazy in the morning, so we go in & haul him out of bed. He’s exactly like an owl. So you’ve gone to Scotch, eh, Tom? How do you get on? Can you lick all the chaps your size now. Auntie says you’re quite a man already. And a cadet, fancy. You & your 4/6 badge. I expect you’ve started to mash the girls now, Tom. Don’t let the boys bully you, Tom, give ’em a straight left, even if you get a hiding from them. If a boy gives you cheek, fight him & even if

He slugs you, he’ll think more of you. Don’t let any son of a gun make a fool of a Ramsay, Tom. Show ’em that you’ve got stuff in you, good old Scotch stuff. So Jim has been chucked out of the Congregational Choir on his ‘block’ as you say, Hal, & had to go and take refuge in a Presby church. Good Biz, Jim, I’m awfully glad to hear of your success. Accept my warmest congratulations, Jim. Say, did you roll all the Town Ballers up to vote, as you said, Jim? Well, I’ll be writing you soon, or I’ll talk to Hal and Tom. Why aren’t you & Tom in the choir, Hal? Surely you can sing farmer’s Bass now Hal, with your hayseed propensities & all that & Tom, I’ve often heard him sing in a Saturday morning when the buggy was to be washed. Ah, Tom, toothache is terrible, isn’t it?

Especially on Saturday mornings. Do you play cricket, Tom? Harry’ll give you some points. He seems to be quite the thing now. How are the lamps, Harry? That’s right, glad to hear it. Now listen to my budget of news. The Salon opening was great. On Monday was Petite Vernissage, when I went down & saw artists by the hundreds slopping varnish on their paintings. I also took a bottle of varnish but I didn’t use it, as I was too busy looking at the Pictures, miles of them, hundreds & thousands of rotten things for the most part.

The Grande Vernissage was on the Tuesday & the place was packed full of fashionables, so that you couldn’t look at the pictures for fear of getting on some duchesse’s hair. I think French ones are the ugliest in the world. It was a great sight, though, if only to see the

beautiful women beautifully dressed, & the celebrities. I saw, besides dozens of others, Carolus Duran & Jean Paul Laurens holding forth. You can’t imagine the size of the exhibitions, the New & Old Salons. It’s terrific. They’re both held in the big Grand Palais des Beaux Arts, a most magnificent building, by the Seine, opposite the EiffelTower & all that, in fact it was built for the Great Exposition, & is the only permanent building. It seems a shame to see them destroying all these beautiful buildings, but of course they’re run up & made to look nice for the Exposition. The Grande Palais des Beaux Arts is built of marble & white granite, & has a glorious façade of columns all round. Tell Auntie that the weather is perfect. A bit windy at times, but generally fine I’m working altogether in my studio now, excepting… 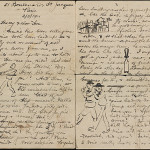 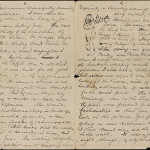