Letter to his sisters

This is an affectionate letter to his sisters, written when he had just started to live in Paris, sharing a studio with James MacDonald. Both can be seen in the photograph where Ramsay is playing the piano referred to in this letter. “Auntie” is his natural mother’s sister Janet, who married Ramsay’s father. Florodora was a popular operetta at the turn of the century. A topper is a top hat.

You see I’m going to kill 3 stones with one bird, as I have so little time now to write separate letters, & you are such bricks in writing me such nice letters so often,

that you must have a turn. First of all, tell Auntie I’m quite well, & alive an “kickin.” Madgie, I know an American student here who knows Gus Dirks well, hes quite young, & the most  comical fellow imaginable.

So you’ve been on the “ran tan,” have you, you girls. Lambert’s great friend

“Willie” Beattie had a part in “Florodora.” Did you notice him at all. No wonder

Auntie was tired out,should think she would be. You’re alright now, Auntie,

things easier. You’re a terror, you know, unless someone watches you, as Annie

says. You ought to see me darning my socks & sewing on things generally. Oh dear me. This is how my coat looks after I’ve sewn on a button or two.

Tell Auntie I’m glad she enjoys my poor letters. Don’t tell her that Paris is fearfully cold again, snow all over everything, inches deep, & piled up in drifts in places.

It’s fine to walk on, like velvet, until your feet get frozen. However I’ve

got heaps of good thick clothing, so I’m OK. Isn’t Jim a swell, getting that trophy presented to him. What on earth’s he going to do with it.

Glad to hear that Bobbie Robertsons getting on all right. Jim and I have hired a piano

for a while, as it isn’t ruinous, & so we keep the cats awake o’nights.

I think there are more cats in Paris than anywhere. They have grand moonlight concerts around our courtyard, & we have good practice handing half bricks to them. You ought to see moonlight on the snow, it’s just lovely. The kids snowball the “sal Anglais” in the street, so when I go out with my topper on I dodge the street urchins otherwise Madgie, I’ve been too busy to go to see Brown, but I’ll go soon.

I wanted to send a bottleful of snow to you, but Jim Mac. says it would

Fancy Harold Locke & Will Louie and the Perdues all gone to Sth Afrique. Wonder’ll never cease. And most wonderful of all Tom a Scotch Collegian.

S’pose his head’s about this size, eh Jim. The night we got our piano, all the coons in the place came along & we had a dance, each played the piano till he was  tired while the others danced anything on  their own till everyone dropped. Such a lot of idiots I never saw. We each invented our own dance.

Look here, I’ll have to go & chase myself down to the “Poste” now so chin chin dear wee sisters mine.

Give love to Father & Auntie & all the others & accept for yourselves

from your loving brother

Will take time & write a decent letter next time. Am very busy. 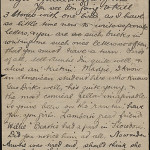 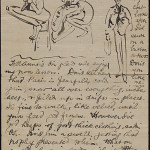 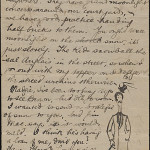 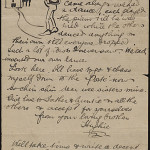