Ramsay sailed on the S.S. Persic from Melbourne to London. On board he had the good fortune to meet the artist George Lambert and his new wife, Amy Lambert.

The ship arrived at London in November 1900 and Ramsay left for Scotland to visit relations. Mima Lennie remembered him as “a tall, slim young man with a keen and piercing eye, and while he was painting he seemed inspired and entirely absorbed in his work. In conversation he was vivacious and he had a keen sense of humour.”

Ramsay was impressed by Whistler’s painting of Thomas Carlyle in the National Gallery of Scotland, and seeing Whistler’s works must have reinforced his approach to portrait painting.

Ramsay moved to Paris in January 1901 and lived there for 15 months. Here we have a young man who had grown up in a religious household, playing the organ at church, with loving and supportive siblings, dux of Essendon Grammar, suddenly alone and in the vibrant and sophisticated fin de siecle world of the Parisian art scene; the cultural shock must have been intense.

He shared a studio at 51 Boulevard St Jacques in Montparnasse, close to many other aspiring artists. Lambert arrived soon after and lived nearby. It is worth noting some of the other Australian artists studying and working in Paris; Max Meldrum, Rupert Bunny, Hans Heysen, James MacDonald and George Coates.

He joined one of the many art schools, the Academie Colarossi, and concentrated on developing his skills. He worked hard. Many at that time surrendered to the carnal delights of Paris, the absinthe drinking, the showgirls. But Ramsay was, as he writes in a letter, “quite settled down now in Paris to hard work, and what a grand place it is to work in. You simply get drawn into the swim. I am working at Colarossi’s Atelier, taking Mr Longstaff’s advice. Start in the morning here at 8 and work till 12, and then again at night from 7 till 10. In the afternoons I work in a studio with another student, in fact, we live there, in true quiet student fashion.”

Ramsay soon became the most admired student, and within 3 months had a painting accepted at one of the two annual salons, these being the main art events in Paris.

The major influence at this time on Ramsay, and on many artists in his circle including Lambert, was Velasquez (1599-1660). In fact the only painting he copied on his frequent visits to the Louvre was Velasquez’s “Infanta.”

Here is Ramsay writing about the influence of earlier painters. “It is a revelation to see all the grand works of the Old Masters…I really don’t know which masters I like best, as they’re all so perfect in their own particular way. Velasquez for ideal realism, Rembrandt for character and realism, Correggio for grace, Titian for colour, also Veronese and Tintoretto, Van Dyke for refinement and poetry of line, Raphael for graceful line, Michaelangelo for grandeur of design, Ribera for a lot of good qualities combined, and plenty more. They just open your eyes in fine style and broaden your ideas. I think Velasquez, Rembrandt and Ribera come home to me strongest just now.”

Ramsay studied and painted for long hours, often from before breakfast to late at night. Most of his works were self-portraits, partly because he wouldn’t have to pay a model and could paint when it suited him, but more so because his art wasn’t about capturing light and colour as we see in his contemporaries who were Impressionists. His art was concerned with the insights to be gleaned from subtle variations of tone and mass in a painting, and this developed through a close study of painters such as Velasquez.

It must be remembered that he was in his early twenties and in the process of refining his particular style.

He achieved real success when four of his paintings were hung in a prominent position at the New Salon in 1902. These paintings were Jeanne, Rene Puaux, Still life-books, mask and lamp, and A lady of Cleveland. 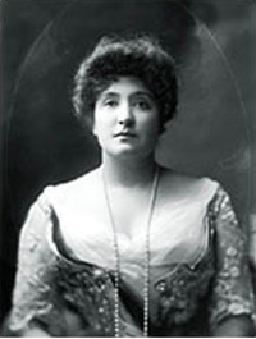 More success and opportunity came soon after; he was introduced through his friend Ambrose Patterson to Nellie Melba.

Melba was forty, at the height of her international fame as a soprano, and a very influential figure in the European arts scene.

She arrived at Ramsay’s studio and must have seen in Ramsay a kindred spirit. She too was hard working, both had a real feeling for art and music, both were outsiders in their artistic field.

Ramsay was commissioned to paint her portrait, and he was fully aware of the importance of this. Not only would it bring him a possibility of fame and wealth, and the recognition he deserved, but it would vindicate his decision not to follow in his father’s profession.

“Madame Melba invited me to dinner at her magnificent house in Great Cumberland Place, and has given me a commission to paint her portrait, full-length and life-size…the ‘ad’for me will be enormous as she’s one of the greatest ‘lions’ of fashionable society, and the personal friend of crowned heads. She’s wonderfully nice and kind to me, and seems anxious to help me on to the best of her ability.”

Ramsay’s stay in London coincided with the beginnings of the Edwardian period of painting. The most famous painter was John Singer Sargent and he became even more of an influence on the impressionable Ramsay.

“Sargent dominates the Academy, and he absolutely convinces me as to what a great, a really great painter he is. In all of them [eight canvases] he gives us the beauty of life, the palpitating flesh, the beauty of light and colour, the lovely truth of atmospheric envelopment: his things absolutely exist. Added to that, an absolutely masterly handling, which apparently can’t go wrong.”

Ramsay had four paintings accepted by the British Colonial Art Exhibition in June 1902. He was on the cusp of a brilliant career.

He became very ill, and tuberculosis was diagnosed. Doctors advised him to return immediately to Australia.

Melba lent him the money needed for a ticket, and he left.

The Melba portrait was never finished.