Ramsay writing to his stepmother, full of optimism and keen to make the most of an opportunity to achieve international fame. Nellie Melba 1861-1931 was the first Australian musician to achieve international fame, and sang lyric soprano roles in Europe and America. She helped many Australians who were attempting to make a name in Europe, and her personal charisma can be seen in Ramsay’s reaction to meeting her. He sketched her at his studio in Paris and started to work on a large oil portrait in London. Then personal tragedy struck; he had contracted tuberculosis. In June 1902 he wrote to his cousin John Lennie: “It’s hard John, isn’t it? Just when I have absolute success within my grasp, just when I see the probabilities of my being a successful painter, that it should all be snatched from my grasp. But I’ve got my back stiffened and I’ll see this business through. I’ll know better than to overwork and starve now.” The “Clydebank” referred to was his family home in Essendon, Melbourne. 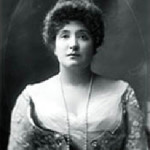 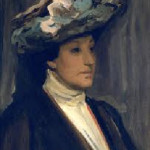 51 Bd St Jacques
Paris.
3/4/02
My dear Auntie
How the time does fly. Here it’s April again, ¼ of the year gone. Yet when I look back on the time when I left home, it seems much longer than the 19 months, more like 19 years. Even with time I don’t seem to get over my fits of longing for Melbourne & Clydebank; I find myself looking forward with the greatest anticipation to my return home. I was glad to hear last mail by Jim’s, Nellie’s & Tom’s letters that everybody was well.
2
I was quite anxious for you all to get the letter I sent last mail, containing some good news. I have got some more to give you now. I have met someone who will be of more help to one than anyone else, namely Madame Melba. Patterson brought her to my studio last Friday afternoon. She was accompanied by Mr. Haddon Chambers, the playwright & an Australian girl, Miss Johnstone. Madame Melba was just great, & made me tell her all about myself, how many commissions I had had over here & all that. She was intensely sympathetic, & I quite
3
fell in love with her. I fancy she rather took to me for some reason or other, as she seemed so interested & told me that she would be very angry with me if I didn’t go & see her, first thing when I get to London, & she has promised, quite voluntarily, of her own accord, to do everything she can to help me, which, coming from such a person, is almost an assurance of success. With such a friend, as Madame Melba, who knows everybody who is anything, well, it looks rosy for me, Auntie. My lucks in lately. My greatest good fortune, next to having 4 pictures in the Salon, is to have
4
been looked on favourably by Madame Melba. She actually sat for ½ an hour for me, to do a sketch but I was a bit flabbergasted & too nervous to do a ‘chef d’oeuvre.’ She has promised that she’ll pose for one in London. What an opportunity. Think of it. If I could make a successful portrait of her, I’m a made man. Of course, her going out to Australia in July may delay things for me; it’ll be about a year’s absence for her. Madame Melba’s a charming lady, so natural, sincere & unaffected. Although she’s a great lady, you feel that… 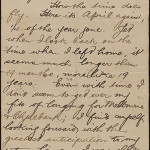 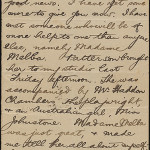 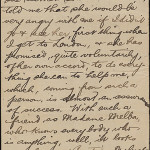 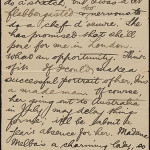