Ramsay was reunited with his family and his fiancée, Lischen Muller. Although advised to rest, he continued to paint, partly spurred on by the inspiration of seeing the paintings of Sargent in London.

Melba returned to Melbourne and held an exhibition of thirty-eight of Ramsay’s works. These were met with acclaim and large crowds.

He spent the last few years convalescing at the family home in Melbourne or at Barnawatha, near Albury, where the drier conditions were deemed healthier. In this time he painted some of his most impressive works; Nellie Patterson, The sisters, Lady with a fan, An equestrian portrait. More revealing are the sketches and paintings of Ramsay himself.

His Paris self-portraits were bold and confident; now his self-portraits show a greater introspection and awareness of the effects of the life-sapping disease. His face becomes gaunt, his body bloated by medicines, he begins to wear glasses.

He broke his engagement, his younger sister Jessie who nursed him contracted tuberculosis. 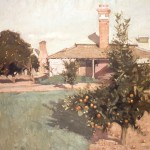 The house where Ramsay rested, near Albury NSW.

He moved here because the dry air of the inland and the lack of distractions were meant to ameliorate the effects of tuberculosis. 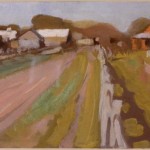 Ramsay was sent there in the hope of recovering from his illness in the drier, warmer countryside of inland Victoria. 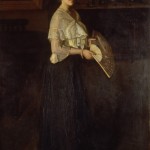 Lady with a fan 1904 oil on canvas 188x120cm Melbourne. National Gallery of Victoria.

Portrait of the artist’s fiancée, Lischen Muller. This was his last portrait of his fiancée. As with Keats, the implications of having tuberculosis meant that a lasting relationship with the one true love and inspiration of his short life was impossible. 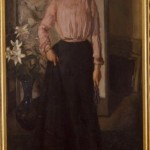 The artist’s sister. As a comparison, see the earlier portrait of her painted before Ramsay left Australia. 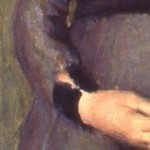 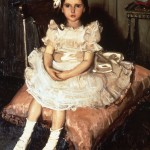 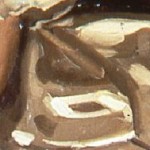 A portrait of Nellie Melba’s niece; Melba commissioned the work.

The influence of Sargent on Ramsay’s painting can be seen if this later work is contrasted with the earlier painting of a girl, Jeanne.

The influence of Whistler, the restraint and smaller tonal range, gives way to the virtuosity and perhaps slickness of Sargent. Ramsay paints with bold, sweeping strokes, echoing his new confidence and sense of urgency. 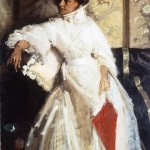 This portrait was unfinished due to Ramsay’s illness and subsequent death. 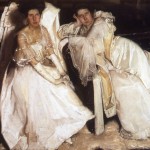 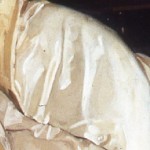 Portrait of Ramsay’s sisters, who were watching him paint against doctor’s orders.