A group of students at the National Gallery School 1896 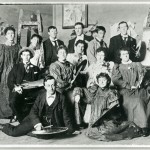 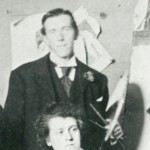 A group of students at the National Gallery School 1896.

Ramsay was quickly recognised as the outstanding talent of the school, although he didn’t win a travelling scholarship.
The school was dominated by 2 contrasting styles. The director, Bernard Hall, extolled a European approach, with an emphasis on decorative nudes and a rigorous study of drawing and reproducing plaster casts. McCubbin was part of the Australian Impressionist movement, where painting often done in an outdoor setting and the palette was naturalistic and suffused with sunlight. We think of Tom Roberts, Arthur Streeton and McCubbin.
Ramsay began to paint under Hall in 1895. After drawing and before colour, the teaching programme emphasized the significance of tone. Hall, and many artists such as Whistler, Manet and Sargent, were profoundly influenced by Velasquez. Hall passed on to Ramsay this admiration of Velasquez.